written by Kellen Burden
Kellen is a local author and self proclaimed “Tacoma Enthusiast.” More of his work can be found at www.goatfederation.com 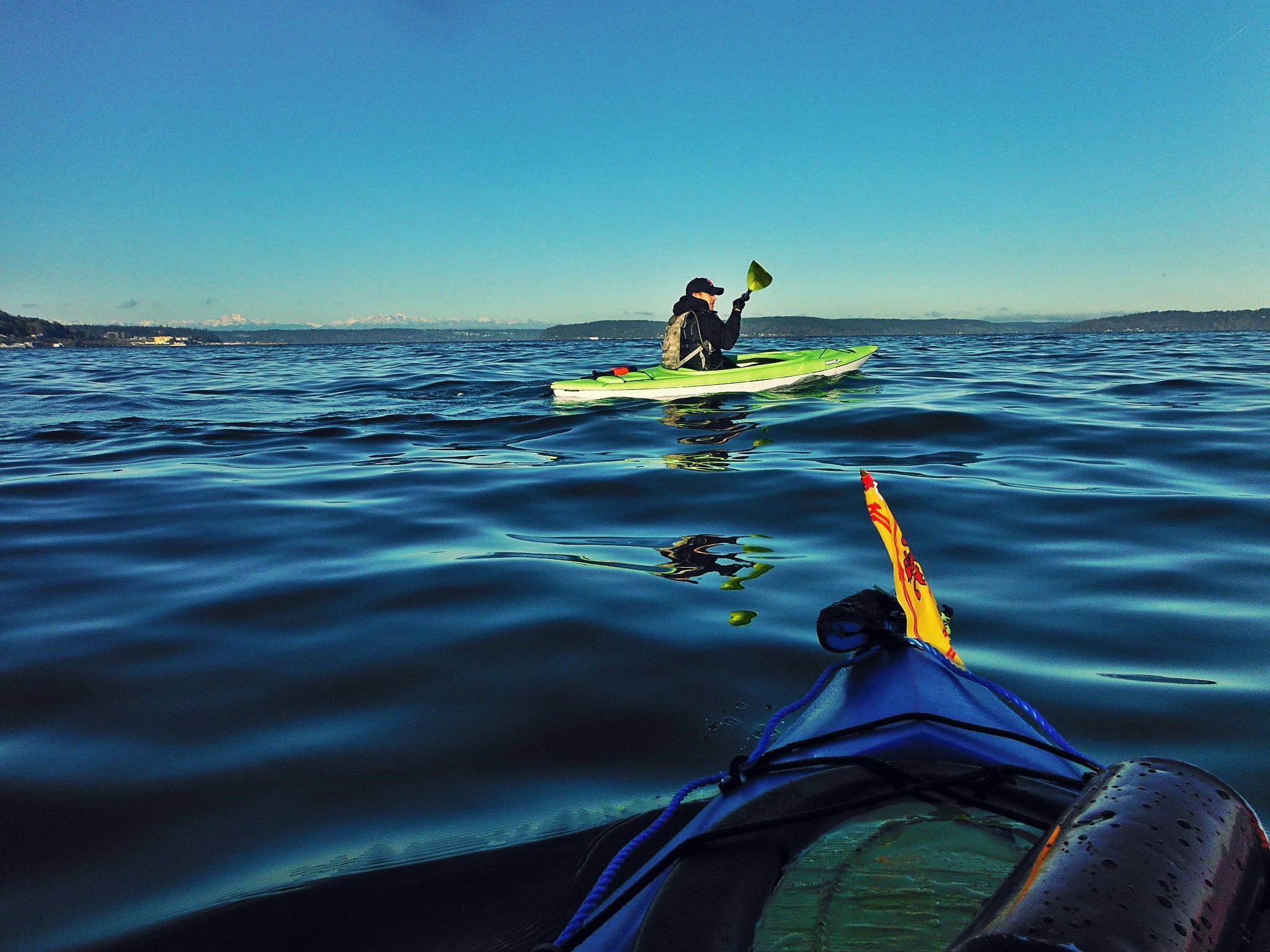 I was standing in the Wag pet market on Proctor, hefting a bag of kibble onto my shoulder when the woman behind the counter caught me wincing.
“You okay?”
“Yeah, I’m just sore,” I said, working my shoulder in its groaning socket. “I was kayaking yesterday.”
“Oh cool, where?”
I didn’t know the name of the beach. I pointed west.
“I just went across the water to Vashon.”
“Oh neat, what kind of kayak do you have?”
“It’s green,” I said, which sounded waaaaay more ridiculous out in the open air between us than it had in my head.
“Who do you kayak with?” She asked, a twinge of justified worry in her voice for this man from the unknown beach and his green kayak.
“I went alone,” I said.
And she said, “Oh no.”

Which is also what my wife, father, mother, and coworkers said to me when I told them.
I sympathized with everyone’s concern. Adjectives like “dull” and “cautious” would not be used in a memoir about my formative years.

“Do you want to go paddling with someone?” My worried pet store friend asked.
I told her I didn’t know any other kayakers and a knowing smile found her face. The smile of someone with help to offer.
“You should talk to Kazuhiko.”

Kazuhiko Griffin’s weekly newsletter found its way into my email inbox a few days later. Weekly updates with weather conditions and Flickr photos of the frigid blue Tacoma waterways, taken from the bow of his kayak with a hand-rigged digital camera. Pictures of freighters in transit and seals basking on old junkers. Of driftwood bleaching on rocky beaches and the nose of his kayak knifing through glassy water.

These were pictures that meant something to Kaz for one reason or another, and as I read his notes on the trip and thumbed through his Flickr account, I began to paint a picture of him in my mind. A quiet, industrious man who liked animals. A fact collector who adventured. I decided that I had to meet him for myself. 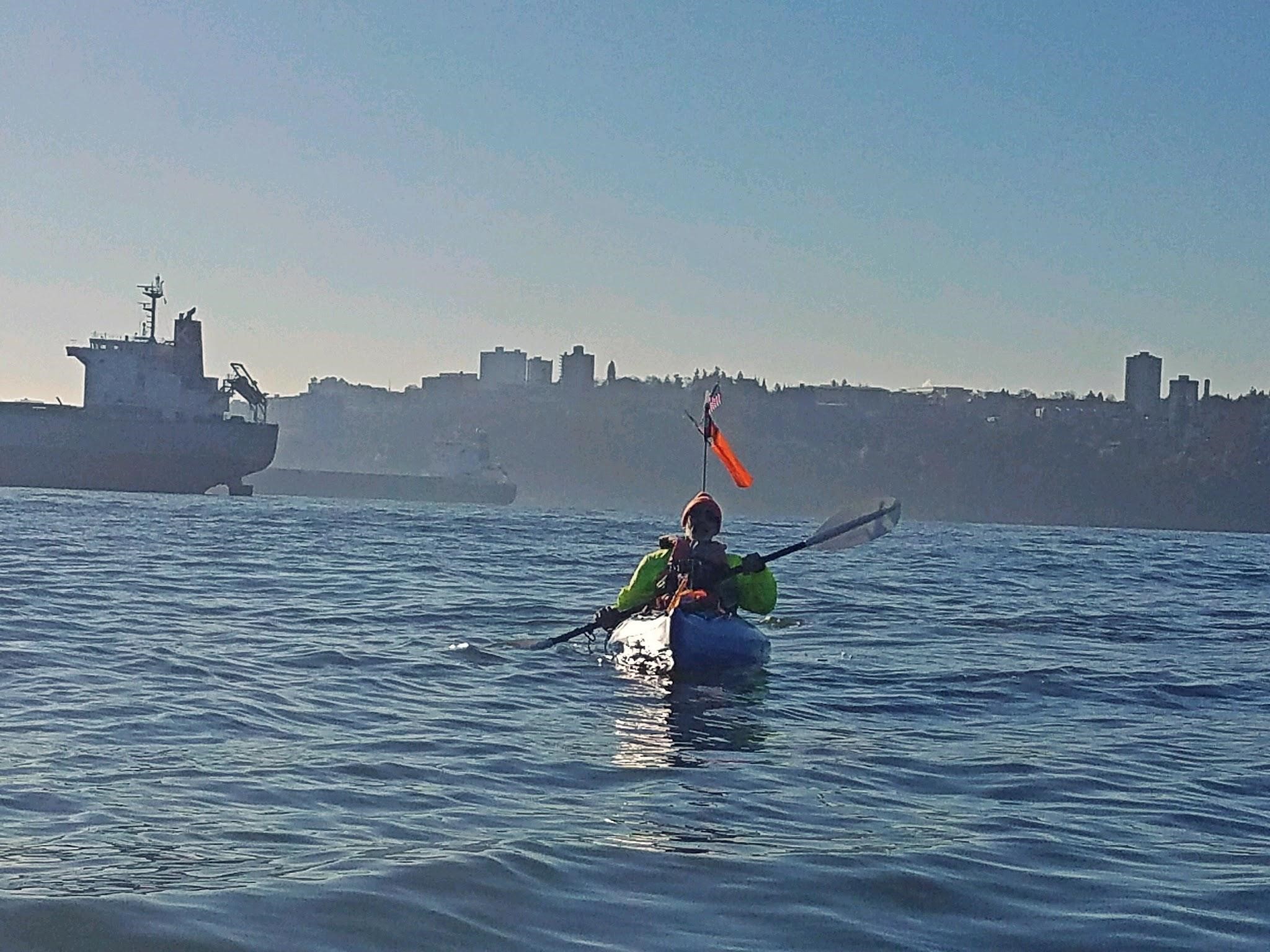 9:43 am, on a weekday with a fine mist reaching out from between my lips to twist and die in the cold December air. To the west, over a turbulent sea, the Olympics clear and jagged against a crisp blue sky. A ferry cuts across the water for Vashon. A train rattles across the tracks in Old Town. Sitting on the crescent moon beach of Jack Hyde park in my hand-me-down wetsuit, with my budget kayak, surrounded by the city in the midst of its winter routines. Kaz pulls a blue kayak on a cart across the train tracks from Old Town. The cart is a homemade contraption comprised of PVC and sweated copper piping with a couple of stubby rubber tires. It breaks down into three pieces that fit into the back of his kayak. A bit rough looking, but elegantly simple and utilitarian.

“You made it!” Kaz says. His voice echoes across the empty beach I’m embedded in. The sunlight sparkling off the water is caught in his aviators. He’s smaller than he looks in his pictures. Rough and friendly looking at the same time, like a biker who’s ticklish. He points out across the water to the lighthouse at Browns Point.
Says, “You ready?”
I am.

We shove out into Commencement Bay as the sunlight begins its slow crawl towards Tacoma, burning the water a smoky green where it touched it, a steely blue in the shadows. The wind is howling far off, between Vashon and Federal Way, whipping whitecaps in the shipping channel, and we catch the vestiges of it as we paddle, a niggling icy breeze held at bay by the exertion of paddle my wetsuit and the extra gloves that Kaz lent me.
“I always bring extra of EVERYTHING,” He says.
He’s full of these little chunks of wisdom. The kind of hard, practical thinking that you hear about in Outdoor articles about survivors.

We dig along with our oars, pulling across the mouth of Commencement. Kaz, east of me, silhouetted against the stack of condensation billowing from that old gassy papermill. Out here on the water, the world seems quieter. Sure, the rattle of train cars along Schuster and yes, the occasional bang and thump of industry at the port but mostly, just our breathing and the chug and gurgle of paddles breaking water. 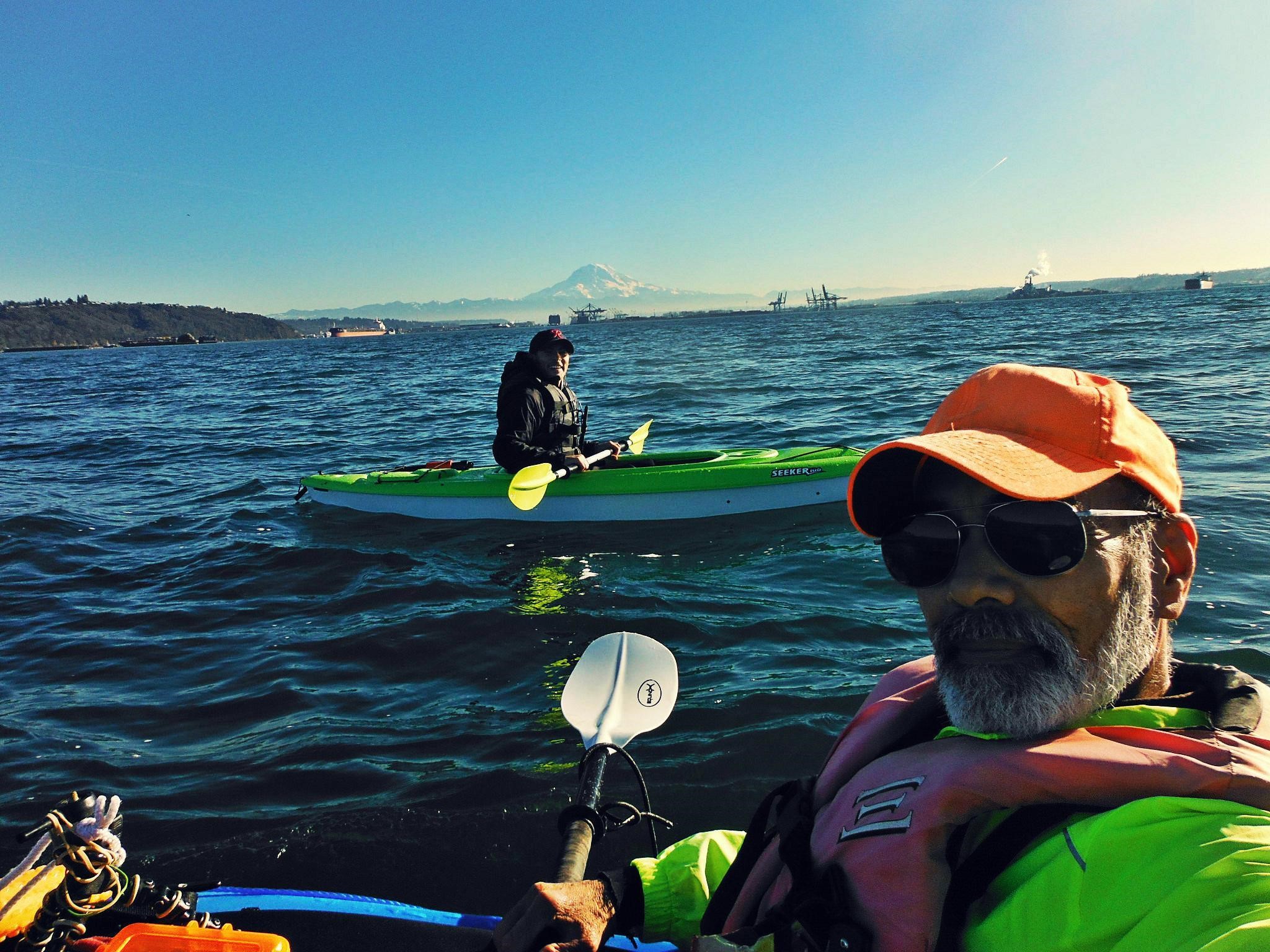 “What did you think of Tacoma when you first got here?” I ask him between pulls from my camelback. Staring down a port lane, watching cranes swing about.
“It was too cold,” he says. “I grew up in Southern California and I’d been stationed in Panama with the Airforce. All I had for cold weather was a denim jacket and a rain slicker and I was like, ‘no way am I staying here.’”
And he laughs because, here he is, which seems to be a good arrangement for both him and for the city. Kaz, the mail carrier. Kaz from the kayaking newsletter. Kaz from the neighborhood. It’s hard to go anywhere in Tacoma without running into someone who wants to talk to Kazuhiko. People wave at him on the street. People tell me about him when I bring up kayaking. We met at a Starbucks once before our kayaking trip and a line basically formed at our table.

Kaz and I cross the port entirely. Slipping along the shoreline with the junkers and the freighters. An old ferry tied to a dock, glistening in the morning light and all around us a chorus of noisy barking like cars stuck in traffic. Sea Lions. Maybe 50 of them, lounging on a barge stacked 6 stories high with pancaked cars. Kaz is ecstatic at the sight of them all lounging in the sun, living their sea lion lives. He really likes animals. Sea lions, cranes, even the seagulls had his attention for a little while. I told him I saw Orca’s in the water a few months ago and it pulls a groan of jealousy out of him. 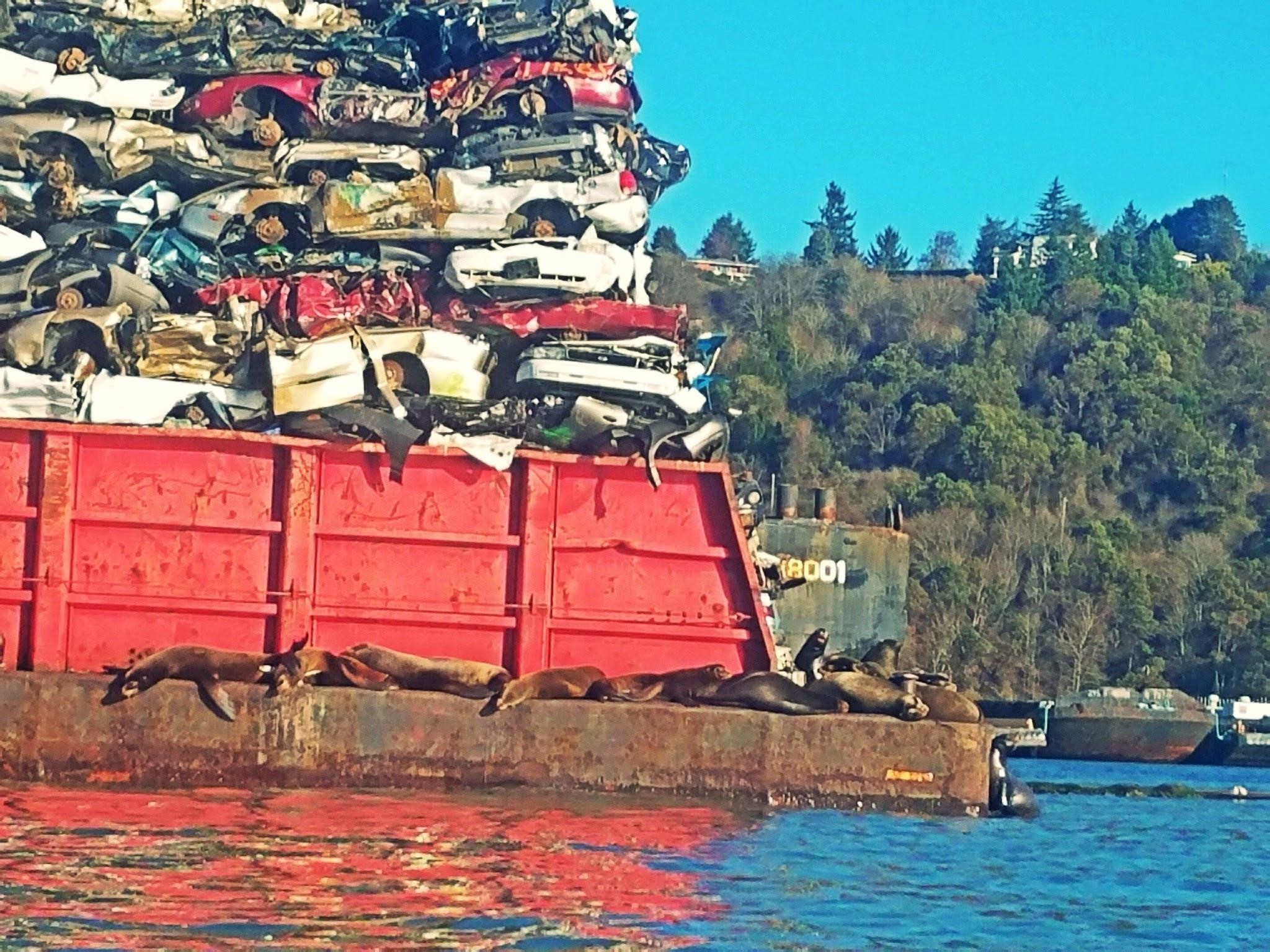 His story about how he first came to Tacoma pulls a groan of jealousy out of me.
Kazuhiko was given orders to report to Joint Base Lewis McChord for the remainder of his time in the Air Force a few weeks after having bought a new Yamaha motorcycle. They told him the process of shipping the bike would be a nightmare and that things got lost all the time, so, naturally, Kaz just drove up… from Panama… through Central America and Mexico, up the coasts of California and Oregon… on a motorcycle.

I pepper him with questions about his trip as we paddle along the tree-strewn shoreline of North Tacoma and he patiently obliges me with tales of danger and intrigue. The gulls squawk overhead. An eagle lights on a branch above the water, staring down into us with those severe eyes. A freighter cuts through the channel between Vashon and Federal Way, a skyscraper on its side, pushing water in all directions and Kaz says, “You’ve gotta watch out for those. Stay in your lane in the channel out there.”
Watch it chug over the white caps, throwing wake out behind it. I bank another new tip under S for Survival. 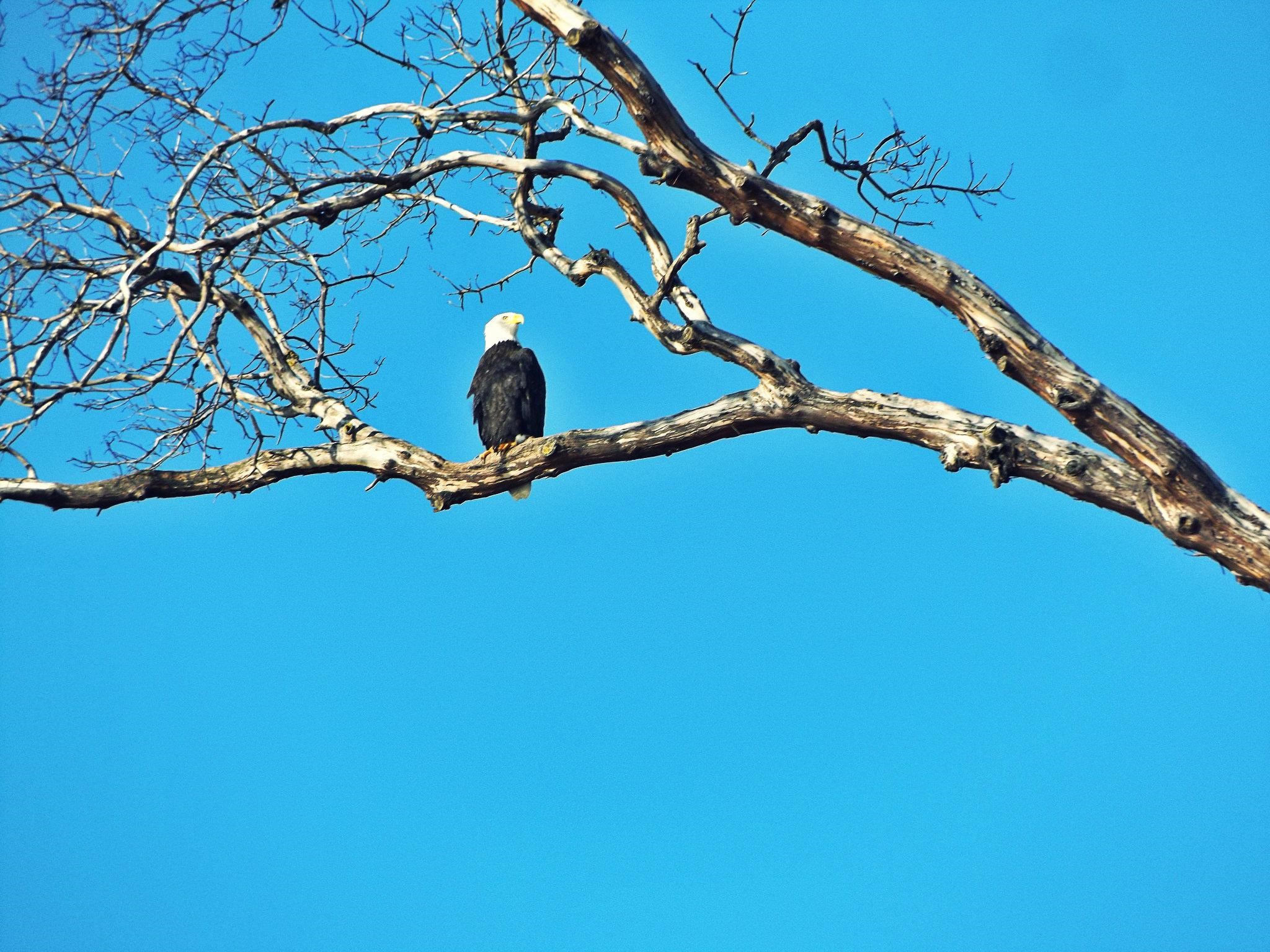 We come ashore at Brown’s Point, sand and pebbles running fingers across the bottoms of our boats as we coast up onto dry land. It’s noon and the sun is high and bright, but that wind whistles icy and defiant across the water and finds us perched on driftwood logs at the base of the Browns Point lighthouse, eating bagged lunches, telling stories.

“I paddled out near Vashon once and a fog settled down on me so thick I could barely see my hand in front of my face,” Kaz says, working on a PB&J, staring out across the sparkle at Tacoma, stacked up on the hill.
“What’d you do?” I ask, forcing down an old MRE that I’d tossed into my pack on my way out the door.
“I could hear the ferry horn,” he says. “I followed it back to shore.”
Another one for the wisdom bank.

Kaz and I back on the water, digging across Commencement watching Rainier slide left to right along our horizon and I think back to all the kayaking trips I’d taken alone before this one. Quiet digging across freezing water. Lonely lunches on empty beaches. Now here I am, hearing stories, learning, sharing an experience. And I’m safer.

“We’ve gotta take a weezie!” Kaz says, pulling his camera off its mount.
“Huh?”
“A weezie!” He has the camera out, lens pointed back at us. “It’s like a selfie, but with two people in it.” 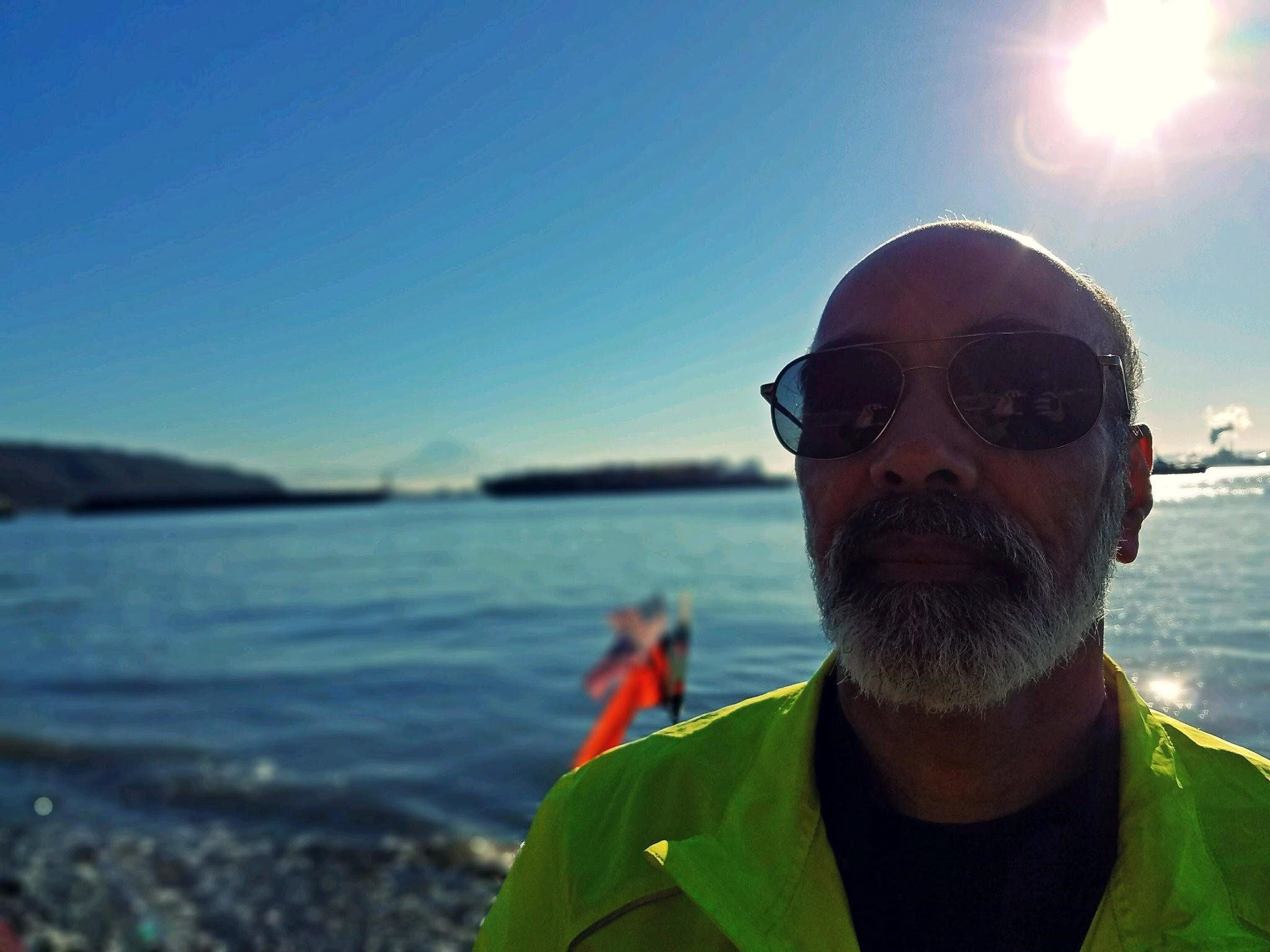 Feel free to contact me at kellenburden@gmail.com with any questions about Kazuhiko’s weekly newsletter. Happy Paddling.