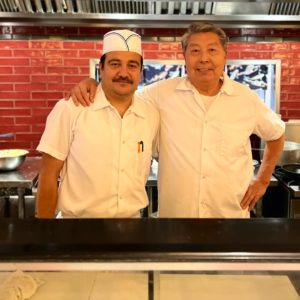 Thirty seven years ago at the brink of Tacoma’s economic development, famous local sushi chef Masahiro Endo saw an opportunity to bring a taste of Japan to our budding community.

Going back further to when he was just thirty-six years old, Endo-san first arrived in Washington to work as a sushi chef  in Seattle’s oldest and most iconic Japanese restaurants (and one of the oldest in the US) – Maneki. With very little money to his name and speaking very little English he worked his way up to becoming a Head Sushi Chef. Endo-san was 18 years old when he started as an apprentice Sushi Cook in Chiba City, Japan just outside Tokyo.

Endo-san fondly recalls a time when Tacoma was coming into her own. But he wasn’t simply an observer watching from the outside in, he played an active role in pioneering a new cultural experience right here in the heart of Tacoma.

He says, “When I first came to downtown (Tacoma), there was barely anything. Only one restaurant. They were trying to turn it into a mini market… It was in a time Tacoma was working really hard to build itself up… And I was really excited about starting something new here.”

In 1984, Endo-san opened Fujiya, the first sushi restaurant in downtown Tacoma. He has since trained many chefs through the years; some who have opened restaurants in Seattle, Tacoma, and even in different parts of the world.

After almost four decades running a successful business, delighting customers, and bringing the best of Japanese cuisine to Tacoma, Endo-san is ready to pass the torch. And he couldn’t have passed it on to anyone better than Fujiya’s current Head Sushi Chef – Juan Del Moral.

Here’s what these celebrated chefs had to say about their experience at Fujiya, working together and their vision for Fujiya’s future.

Q: What does Fujiya mean?

Endo-san: Back then, Japan was known for Sakura, Geisha and Mt. Fuji. Fujiya means House of Fuji.

Juan: He taught me everything I know the last seventeen years here at Fujiya. From Endo-san, I learned not just how to make sushi, but how to make customers happy and how to run a business. Endo-san always takes care of people. He taught me to be a great chef, a great person and a great businessman. I really appreciate all he’s taught me, it’s something no one can ever take away from me.

Endo-san: I wanted Juan to be a great chef and know how to run a restaurant. How to keep customers happy… Now, a lot of newer people to Fujiya don’t know me- they know Juan. He’s a very popular chef and manager here. And the customers come here for him, not me- that makes me so happy!

Q: What does it take to be a Sushi Chef of your caliber?

Endo-san: Authentic Japanese training in Tokyo, Japan is how I learned when I was very young. You start in the kitchen, dishwashing. Then you become an apprentice and learn to cut fish. You learn to make it beautiful and work your way up. It’s a very strict, very long process. You have to be patient, very patient.

Juan: The art of sushi takes skill and time. I started the same way Endo-san did. Dishwasher then an apprentice and kept working until Endo-san saw something in me and made me head chef.

Endo-san: Juan is a really hard worker and a very unusually great chef! 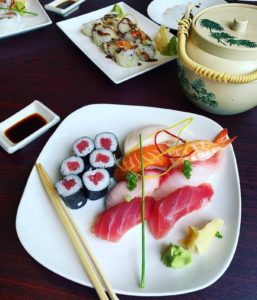 Q: Fujiya has stood the test of time for almost 40 years – what’s the secret?

Endo-san: Covid took a lot out of us. For almost nine months we barely scraped by. But, Fujiya has hit bottom many times even before Covid. We have tough skin, adapt, and we’re here hopefully for 40 more years.

Mashiro Endo-san, a famous sushi chef who knew nothing about America, took a leap of faith and opened a Japanese restaurant that Tacomans have enjoyed for so many years. Through his passion and love for making people happy with authentic Japanese food, he turned Fujiya into an iconic staple in Tacoma.

And by the looks of it, Fujiya is not going anywhere. Endo-san’s legacy will live through the walls of the restaurant, the perfectly cooked and prepared authentic Japanese cuisine and through each person who works there, especially Head Chef, Juan Del Moral. As one of the longest lasting businesses in Tacoma, many believe Fujiya to be THE sushi restaurant in Tacoma.

With over 10,000 followers on social media and multiple awards for Best Japanese Restaurant in the South Sound – it’s clear Tacoma is a raving fan of Fujiya!

From Endo-san, “Come back to downtown Tacoma! This area used to have so many people, used to be so alive! Fujiya is here for you – come downtown again.”