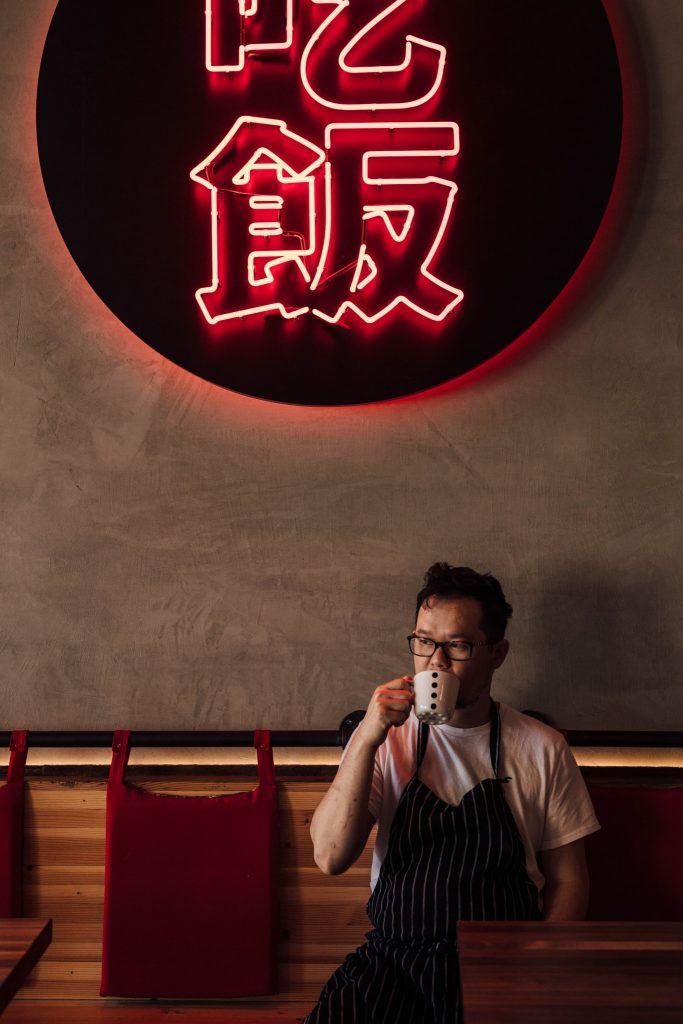 Something old and something new; A recipe for success

The first table was set five years before the turn of the 21st century, when the Ngov family lived down the street from their restaurant that started it all – the original Indochine. The name would eventually make the wise move south where it transpired into a legacy. The Ngov daughters and their husbands proudly branched the Southeast Asian-inspired restaurant into three separate locations within Tacoma’s city limits. Each one is unlike the other while still upholding the authentic flavors and “family-style” that first made them a success when the families migrated from an oppressed Cambodian nation.

Ly, Hong and Buoy were just girls then, working on their school studies between restaurant chores and learning from their parents in and outside of the kitchen. Their age-old dance with the culinary arts fueled a passion for the line of work and longevity in a competitive industry. All those years of hard work have not only strengthened their presence in the community but also encouraged expansion and room for new concepts carefully spun into traditions and family values.

The most recent restaurant endeavor launched last year when the youngest of the three sisters, Buoy Ngov, and her husband and prior chef of Indochine Downtown, Vathunyu “Yu” Nanakornphanom, made the bold decision to step out on their own with the active support of their parents. The newest and trendiest of the venues would be smaller in scale and formality to its oldest sister-establishment and in retrospect, adopt an old nickname to honor the original restaurant. Indo Asian Street Eatery was born.

In July of 2016, Indo celebrated its first anniversary as a new Tacoma enterprise in a prime Stadium location. The energy thrives here, the staff is friendly and attentive, and the food is reminiscent of traditional South East Asian cooking including Vietnamese, Japanese and Korean influence, while infusing a few trendy twists and bold flavor compilations. “This is Yu’s dream,” his wife says, as she reflects on the long years of hard work that brought this concept to fruition.

“We are still a family,” Yu refers to his fellow Indochine heirs in light of the independent operation of the three separate venues. “We wouldn’t be here without family.”

Hunger and curiosity tend to flock to new business, so the ongoing hype surrounding this namesake is promising for its future. Once you’ve been welcomed or served by the owners themselves, happily working their hands at a dream come true, you’re sure to return. It’s that sense of passion and vitality balanced with a heart for family and community that has been mastered here. It was that same family mentality which compelled Yu and Buoy to share their new success with long-time coworkers they could now employ. These days the kitchen space is shared with their parents, and veteran staff like Allan and Sarah, who were two of the original servers when Indochine first took palates by storm.

Orders from the bar 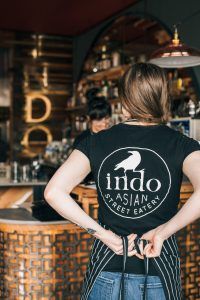 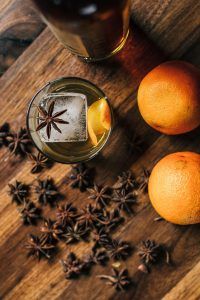 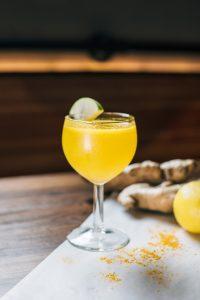 At Indo, the full-service bar is worked into a playful entry display. A reflective semi-circle shines light upon suspended wood slabs showcasing a library of spirits. This floor layout is the product of a smaller restaurant but it also welcomes a different kind of atmosphere and personal exchange that the bar staff is rather excited about. In this joint restaurant and bar-inspired space the staff willingly steps up to wear many hats, sometimes to the point of greeting, seating, serving and bartending, all at once.

The new opening gave these veteran industry folks a fresh approach at something they already knew and loved. Bartenders Wesley McLain and Janell Spirup, rave about the owners who gave them the creative freedom to cultivate a successful bar culture from a blank slate. With practice, intention and skilled hands, Indo has been able to refine a well-received menu of craft cocktails to complement their culinary creations.

The original liquor rep gave the staff a collection of organic and local items Wes referred to as “rather obscure” but it helped launch an innovative campaign for what the bar would become. Today it is a hub of magical potions, including homemade syrups and shrubs (drinking vinegars). Indo drinks infuse with everything from botanicals and fruits to spices and herbs. This adventurous crew has even gone as far as to experiment with curry cocktails. “We haven’t found a sweet spot for that one yet,” Wes returns. “But we do like to play around with different liquors and flavors that people aren’t used to.”

Janell is the second-hand behind the bar at Indo. She notes the big selection of soju (also offered in a sampler arrangement or “flight”). This strong, distilled liquor is similar in taste to vodka but brewed from rice, sweet potato and buck wheat with a lower alcohol content. The Bundaburg also seems to be a popular order but the staff knows you can’t survive on ginger beer alone. The restaurant recently introduced premium Sakes and a flavored Nigori Sake as well as a premium Japanese Whiskey selection. The single-malt Taiwanese whiskey, Kavalan, is highlighted as an up and coming and recently award-winning product. “When the world catches up we’ll already be ahead of them,” Wes smiles.

Popular specialty drinks around these parts include the Imperial Coconut, served in a topped, fresh coconut during the summer months, the renowned Wellness Shot in a glass of organic vodka and turmeric powder, and the ever-popular Mr. Lee’s Old-Fashioned with double rye and house-made anise syrup. Guests also buzz about the Hummingbird made with bubbly prosecco and elderflower liqueur, distinguished with cardamom bitters and garnished with a spiral ribbon of lemon (served with the remaining champagne splits). Every glass is treated like a canvas with citrus twists and tropical fruit wheels, or earthy anise stars and over-sized ice cubes. Every order is a unique and memorable experience. “The seasonal menu gives us the chance to try things out and if it doesn’t work well, we move on,” says the bar staff. They love the incentive to follow fan-based requests. 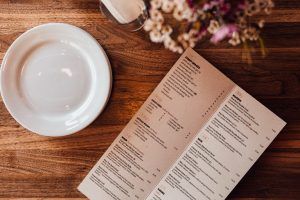 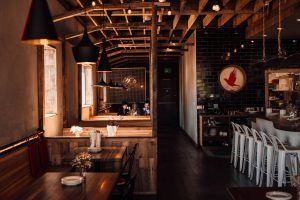 Rustic wood and metal give this open-air inspired restaurant an urban-industrial touch. Natural light and colorful wall fixtures lend a warm welcome for guests of all ages and lifestyles. An exposed network of wooden beams hinges overhead the sleek, dark finish on the wood floors. Intricately stenciled metal comes to life against bright paneling. Different washes and stains of recycled wood stack together in unusual lines and patterns. The neon signage in foreign figures and backlighting along the walls radiate the atmosphere of a true Asian street market. The walnut tabletops are set with succulents to tie in green accents like garnish on a prepared plate. This space and its food are all separate works of art, teaming together to create an unforgettable dining experience that feels exotic and familiar at the same time. The perfect stay-cation destination.

Yu and Buoy attribute much of the interior aesthetic to the assistance and expertise of landlord John Xitco of X Group Restaurants. “He was a mentor to us,” the couple says of John, who helped them conceptualize the finished space. Other community members like Jason Alexander of Tacoma Cabana and Aaron Grissom of DOA lent advice to the couple as they shared similar experiences and struggles in the industry. Yu has always been a people person as well as a creative, from photography and film hobbies, to the handpicked details he and Buoy decided on for the new venue. But the two spare no breath commending the support from valued neighbors in a city that has become home for them.

“We want people to feel warm and welcome,” Yu says. “So the materials are worn with a story and life. It’s a partnership between modern and rustic.”

Indo’s menu is seasonal, which means that while a few staple items may remain, most dishes rotate to offer fresh ingredients and evolving flavors. Yu likes to experiment. It’s a niche he’s incorporated in the new restaurant function as well. But there’s an authenticity and cultural awakening about the way this food is prepared. From a full fried tilapia on last year’s menu to the green papaya salad on the current one. Winter months will yield hearty, comfort dishes such as a Pho French Dip and Lamb Stew Sliders, while summer contrasts with lighter flavors and textures like lettuce wrap-inspired entrees. No matter the time of year, you’ll be begging Yu and Buoy to “bring it back”, while always finding something new to love on the menu. 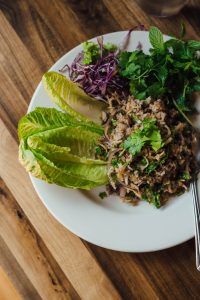 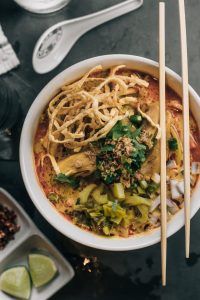 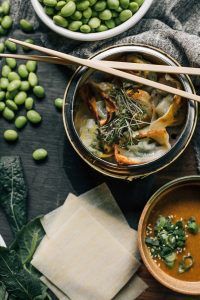 A lunchtime review from the mouth of a first-time customer:

“When I was a little kid I lived across from a family who owned a small Thai restaurant and we ate there twice a week until the owner, Mo, had a heart attack and had to go back to Thailand.” Ever since then, Aaron Heinz has been on the hunt for a place that could recreate those dishes he fell in love with. “When I look for Thai food I look for light, fluffy Thai food. You don’t want to “over-sauce” it.” Aaron says, as he takes another bite of his five-star Phad Thai tossed with extra, fresh-cut Thai chilies. “This is really, really good! I’ll definitely come back again,” says Aaron, who just moved to town. “There’s just something about Tacoma.”

The customers know it. Yu and Buoy know it. You and I know it. There’s just something about Tacoma.

Did you enjoy this article? Were you inspired to Experience Tacoma at Indo Asian Street Eatery? To thank our readers, 4 lucky locals (each with one guest) will win a private cooking lesson from Yu, Indo’s chef and owner. The contest kicks off 8/10/16 and entries will be accepted through the end of August 2016. The final details of the cooking class will be provided to winners upon notice.

Want to participate?
Join our mailing list and be sure to leave a note about the contest,
(OR) Tag a friend on our Facebook or Instagram posts specific to this story.
Wahlah, you’re in!

As a final take away, experience Tacoma with table-side recommendations from your favorite staff!

Inspired Palates video blogs are created by The City of Tacoma’s Media and Communications Office – in partnership with its Community and Economic Development Department.