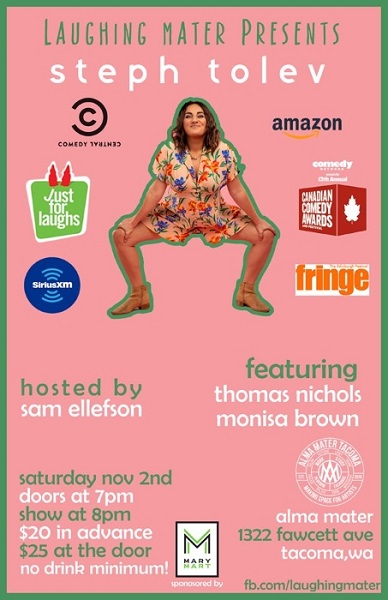 We’re back with our November installment of Laughing Mater!

Sam started a comedy talk show at his university as a Freshman with no idea what he was doing. Since then, we have been nominated for 2 Northwest Emmy awards (NATAS) and been a Finalist for a National Pinnacle Award. He has worked with and written for individuals who have been on Pitch Perfect 2, Broadway, The Voice, Atlanta, and TED talks.

Monisa is the creator and co- producer of QTPOC Is Not A Rapper, a LGBTQIA+ and P.O.C focused curated comedy open-mic and showcase. Monisa has appeared in Portland’s Black Comedy Festival and Seattle’s Bumbershoot Festival.

Thomas Nichols
Deadpan, hilarious, and wise beyond his 28 years, Nichols is a nationally touring comic who’s been featured at Funniest Comic in Texas Competition, Seattle International Competition and was a finalist at the New York Finger Lakes Festival and Denver Make Me Laugh Festival

Headlining:
Steph Tolev
Steph is a stand up and sketch comedian from Toronto, Canada currently living in LA. As a stand up, Steph has done the prestigious Just For Laughs Comedy Festival in Montreal four times, three of which were taped for TV and air on the Comedy Network. She was recently named one of Comedy Central’s “Up Next” comics to watch and co-wrote and co-starred in the Comedy Central web series ” Steph & Deb” with comedian Deb Digiovanni. Steph can also be seen in the Amazon show “Please Understand Me” produced by Sarah Silverman and was featured in season two of “Corporate” on Comedy Central. Steph has won the Canadian Comedy Award for Best Female Stand up and was a finalist in Sirius XM’s next top comic.

Tickets in advance $20
Tickets at the door $25
Doors at 7PM
Show at 8PM
18+
Sponsored by the best weed shop in town Mary Mart!