Picture this: you’re going about your day in Tacoma when suddenly your eyes catch on a van that looks like a piece of the bluest part of the sky fell and transformed into a mobile bus. Inside the van a man drives with purpose and on the side of the van, written in big bold letters is, ‘THE PEACE BUS.’ 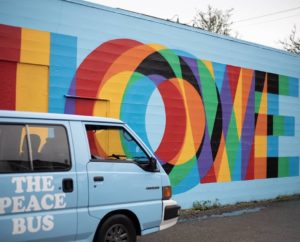 So, what is The Peace Bus and who is the man that drives it?

Kwabena Amoah-Forson, aka Kwabi, is a Tacoma native committed to making world peace the final frontier for society. Kwabi’s journey to becoming a humanitarian and peace campaigner wasn’t exactly linear and included many lessons he learned outside of the classroom.

Before the idea of peace as an action formulated, the way Kwabi viewed peace was much more a way of life, rather than THE way of life. His initial ideas were heavily inspired by the messages reggae music were widely known for; love, unity, and peace.

So much so, he might have skipped a couple classes at Western Washington University in his dedication to becoming a reggae artist.

While he wound up taking a different route, Kwabi credits reggae music for sparking his first impressions on the essence of peace.

However, it wasn’t until he was in graduate school pursuing his masters in business that his perspective on purposeful living started to shift.

He says,“For most people, at some point in their educational journey, something clicks and they decide they want to be a teacher or doctor or lawyer. But that click just didn’t happen for me in school.”

Pursuing higher education had many benefits, but it didn’t work for Kwabi in the traditional sense. He was struggling, trying to mold himself to fit a career path when one of his professors challenged him to focus on who he wanted to be, rather than what he wanted to be.

This mental shift ignited a deep desire in Kwabi to pursue spreading peace by BEING peaceful himself. Without knowing where to start he researched, read books, and learned about different religious teachings on peace.

Some stand out peace activists and humanitarians he chose to emulate were Brian Haw and Abie Nathan.

He thought, “If Brian Haw can camp outside of the United Kingdom’s Parliament for eleven years campaigning for peace I can at least bring some posters to Wright Park and spread the message of peace.”

What started at Wright park in Tacoma with two posters, a boom box, a table and a message ended in an international peace campaign where he traveled to 8 countries and 13 cities.

The message was the same, but there was something else Kwabi had in mind for his campaign.

By branding peace in people’s mind, there is an opportunity to create a true dialogue of what peace could look like for our world.

Being able to see the darker side of various parts of the world shed light on a new way to put peace into action when Kwabi returned home to Tacoma.

Inspired by peace campaigner Abe Nathan’s peace boat, he began looking for a vehicle for peace to help promote his campaign.

When he came across a 1970 Mitsubishi Van, it was a wrap. Painted blue, with “The Peace Bus” in white Cooper Black font, his plan was initially just to drive around and spark conversations of peace in people’s minds.

But, it wasn’t enough. He could do more for peace.

“Hunger, homelessness, poverty..they’re all intertwined. We can’t make peace happen without first meeting the essential needs of every human being.”

In fact, a trip to the Mexican border allowed Kwabi to refine his message and the driving force behind the peace campaign.

Back in 2019, the immigration crisis being reported seemed to constantly put immigrants in an incriminating light. Kwabi knew there had to be more to the story and decided to investigate deeper by requesting an interview with the San Diego Border Patrol.

Of course, San Diego Border Patrol was not as enthusiastic to Kwabi’s request for an interview.

But, that did not stop Kwabi, not even a little.

“I’m a very, VERY persistent guy! So, I went to the border anyway.”

After posting his mission on social media he received massive support from people financially helping or opening their homes to him and his friends along the way.

“People..complete strangers, came together for us and really showed us what love and unity can look like. It was a beautiful experience I’ll never take for granted or forget.”

Kwabi and his friends made their destination and even somehow got two border patrol officers to do an interview with them! His main takeaway?

“My big takeaway was that most immigrants coming illegally over the border were looking for resources. That was something I never heard of on either side of the spectrum from mainstream media. That the immigration crisis was in fact an humanitarian crisis..it’s people who are hungry, who need shelter, who need safety.”

The interview with the San Diego Border Patrol resulted in two major developments:

Even still he questioned– what was stopping lasting world peace from happening?

His experience and research led him to conclude that the biggest threat to peace was poverty.

“When people are in poverty our world is not able to reach it’s true potential because the people who do not have access to resources cannot cultivate their own potential and contribute to their communities.”

Kwabi explains how poverty prevents people from seeking themselves by preventing them from becoming. He reasons that poverty is dehumanizing and any system, including racism, that works to dehumanize a population is violent because it inhibits people from their humanity.

“When we look at a nonviolent world, we have to completely remove the institutions of violence like racism, which is pure violence, and poverty. You cannot live without your essential needs met and along with that is a sense of purpose. You can have food, clothes and shelter but without self worth and purpose you might not be inclined to eat food or take shelter, so it’s all intertwined in the essence of peaceful living.”

When looking at achieving peace we have to look at the three types of peace.

Right now, Kwabi is most focused on interpersonal peace.

The most recent extension of implementing interpersonal peace has been through filming a children’s show called The Peace Bus Show.

“The main theme of the show is humanizing people who aren’t typically humanized… I am a firm believer that no matter what you believe, if you can have a sense of understanding and empathy towards your neighbors and fellow human beings then we can have true progress towards peace.”