From a basement in Lincoln district, a dish is handmade
Story by Kayla Schroader / Photos by Lisa Blackmore 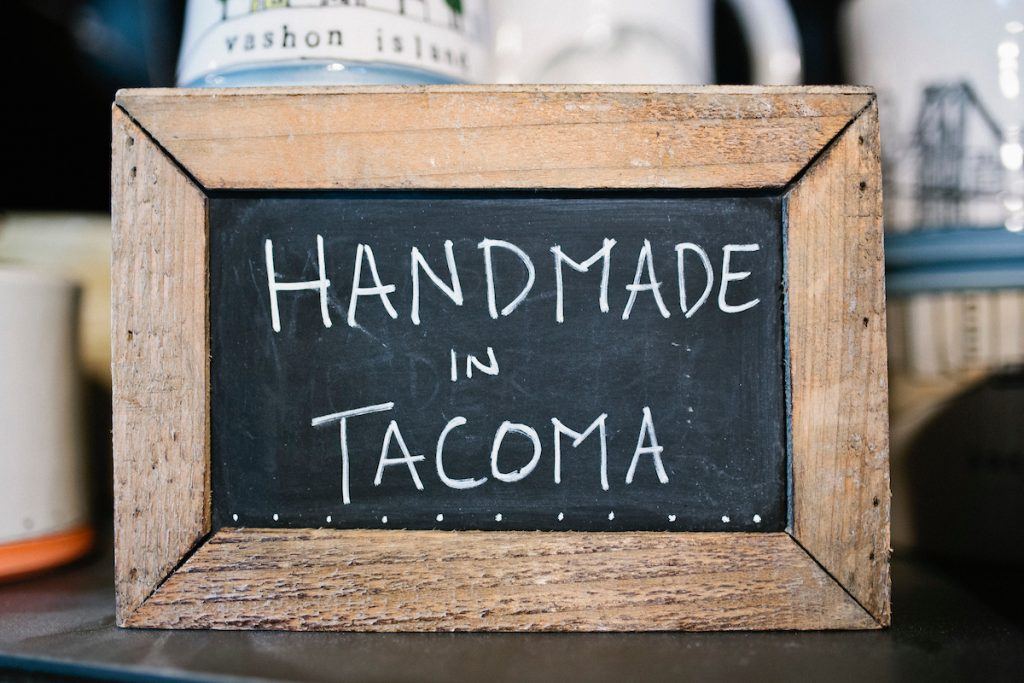 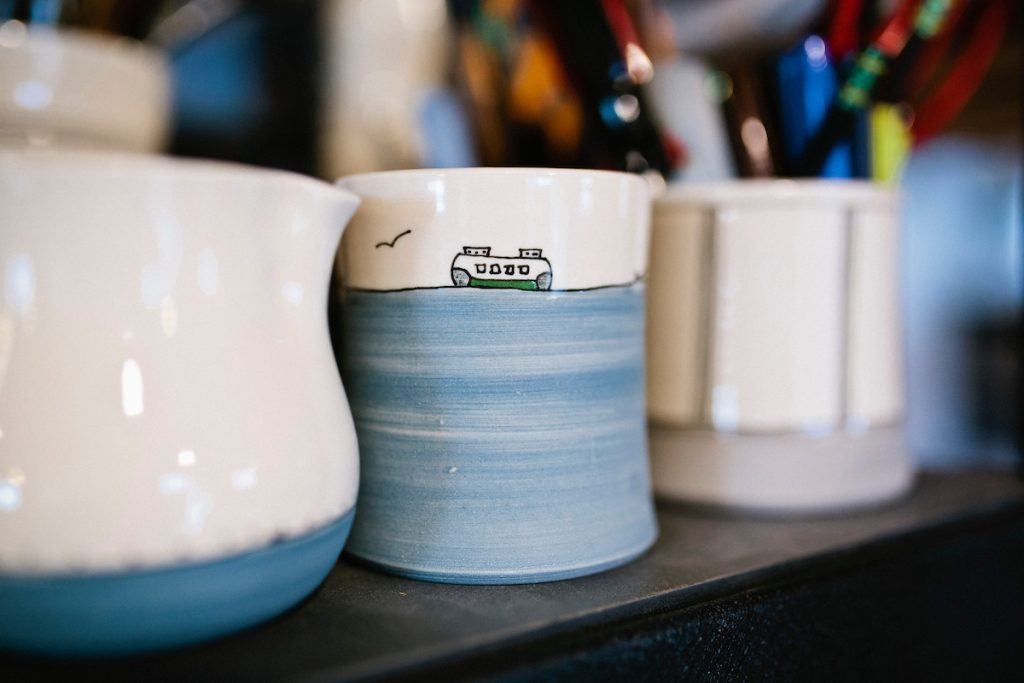 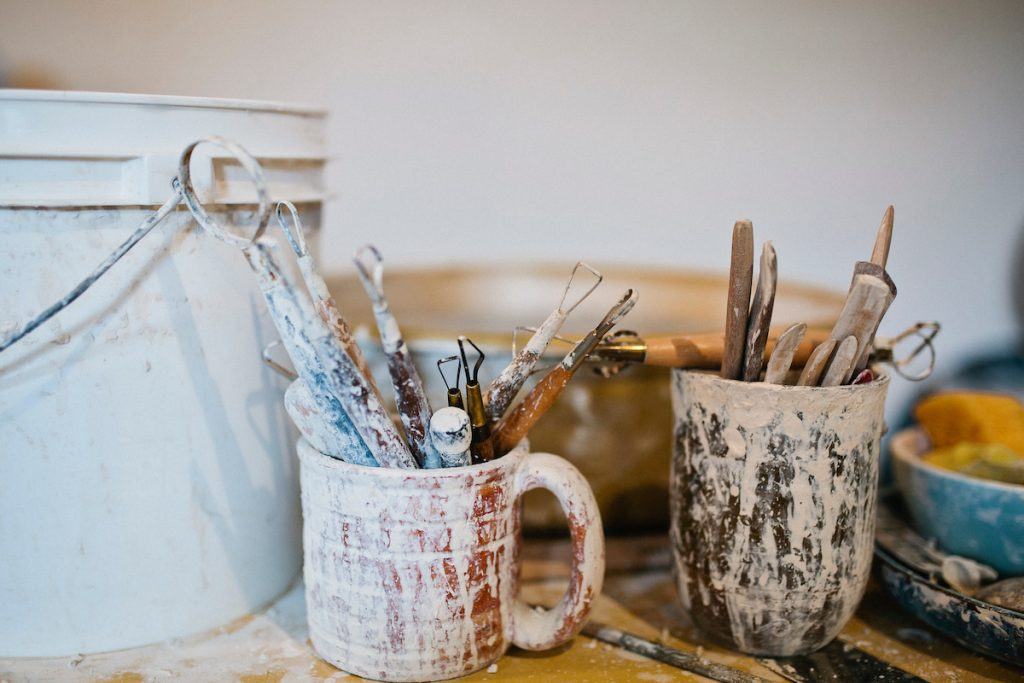 There is sentimental value in a good mug. Regardless of what’s inside, the dish itself seems to hold a close comfort that Sarah Woodson of Downing Pottery knows well. It’s why she has invested in her own business and transformed her professional pursuits with a lump of wet clay from Clay Art Center.

“Mugs really are a unique form, one that I haven’t tired of,” Sarah says, surrounded by her handmade collection which does range from plates and vases to the mugs she loves best. “There’s a physical, visceral connection to a vessel that you hold in your hands and drink from. I think it’s why so many people have a favorite mug and almost no one has a favorite plate. As a maker, it’s really gratifying to be told that you made someone’s favorite thing. So, for now anyway, I make many more mugs than plates … I appreciate a good handle.”

She “wedges” the clay to draw out air pockets before taking a seat and flipping a switch. The pottery wheel starts to turn in this small cement sanctuary beneath her Lincoln district home, now resonating with a soothing hum from the motor. It’s a cool, dry space illuminated with natural light – Sarah’s element – her dog napping close by and shelves of finished dishes awaiting their new home. Sarah zones into her craft and like clockwork balanced with concentration and a steady hand, a new mug is formed. It joins the line for the kiln where it will be stacked into the oven drum with 64 others. Suddenly it’s hard to tell this one from the rest, perfectly shaped and weighted like those before it. It won’t be until the final touches of paint that this mug may take on a different direction, perhaps with a water-toned blue and famous Tacoma skyline. This style is a local favorite from the collection of hand-drawn cityscapes that Sarah’s internationally known for.

“Home” is the inspiration. “So many of my mugs are purchased by or for people who are away from home, or reminiscent of childhood or a time in their lives when they lived in a specific place,” Sarah says. “Folks buy my mugs because they have pride in their city or excitement for a new neighborhood they’ve moved to. I think that’s what people connect to so strongly in my work is the sense of place, the feeling of home – which is so important to so many.”

It all started with a bang. Sarah was hit by a car while riding her bike one day and the incident woke her to the pursuit of happiness in the form of a pottery class and new hobby. Where once her pursuits pointed her toward a career in philosophy and liberal arts, now more time and energy was being devoted to her pottery. She had no background or previous training, but Sarah trusted her insight, tapped into her niche and became a small business owner.

“Suddenly I realized, this is who I am and this is what I do. I don’t think I would have had the bravery to do that without having something that literally collided with me and knocked me off my life path and onto something else.” 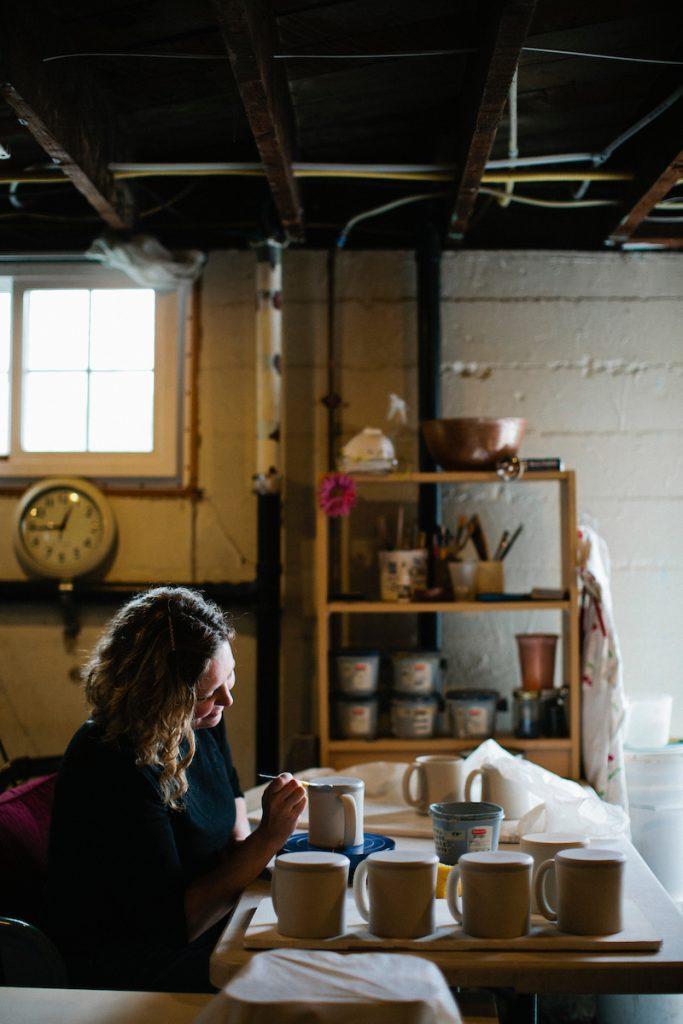 At one point Sarah was producing and customizing mugs for 28 cities and while it was ultimately the bridge to leaving the bartending scene and adopting life as a full-time artist, it affirmed her aspiration to be a “hyper local” brand, as she says, with the ability to both manage her products and maintain her customer base. Up until last year, Sarah and her husband lived and worked among a bustling Seattle arts scene where it all began – where the accident took place, where her first pieces earned commercial real estate on the shelves of boutique Venue in Ballard, where a Nordstrom-Etsy campaign launched her success, where she and her husband had resided in a beloved Vietnamese neighborhood. But as the cost of living increased and Seattle streets evolved, Tacoma called them home. When Sarah notified her art studio landlord about moving to Tacoma, he recounted four other tales of the same that very week! In Tacoma, they could purchase property and continue their crafty pursuits, Sarah as a potter and her husband as a chef, in Lincoln’s international district. Sarah lights up as she pays tribute to her new stomping grounds, from the Asian markets to Lincoln Hardware. At home here, she feels the surge of pride and comradery.

“People just seem really excited about Tacoma,” Sarah says. She recalls Seattleites growing more and more pessimistic about gentrification and the overall direction of the big metropolis. “Seattle changed really fast and it was hard on a lot of people and artists. But here, they’re cheering for Tacoma. It feels good to be around people that are psyched about where they live.”

This week the Downing Pottery line will launch onto the shelves of Stocklist Goods in downtown Tacoma, beyond its long-running presence on Etsy and social media. The store’s eclectic style of local goods and gifts seems an appropriate fit for Sarah’s hand-crafted collection. She’s eager to grow her roots in Tacoma and the summer schedule is quickly filling with community markets and special events, which will require extra time and attention. On average, 40 hours each week are devoted to stocking the charming and cherished finished products.

Sarah watches her hands as they form another dish. In moments like these, she’s reminded of her late grandmother who grew up flipping houses in South Tacoma with her own, single-mother, while achieving small fame as a Jergens hand model. She had rather disliked her granddaughter’s pottery endeavors and often reminded Sarah that she could have otherwise chosen life as a hand model. In some ways, Sarah has, with a touch of clay. It may feel a little gritty at first, but it’s something like home in Tacoma. 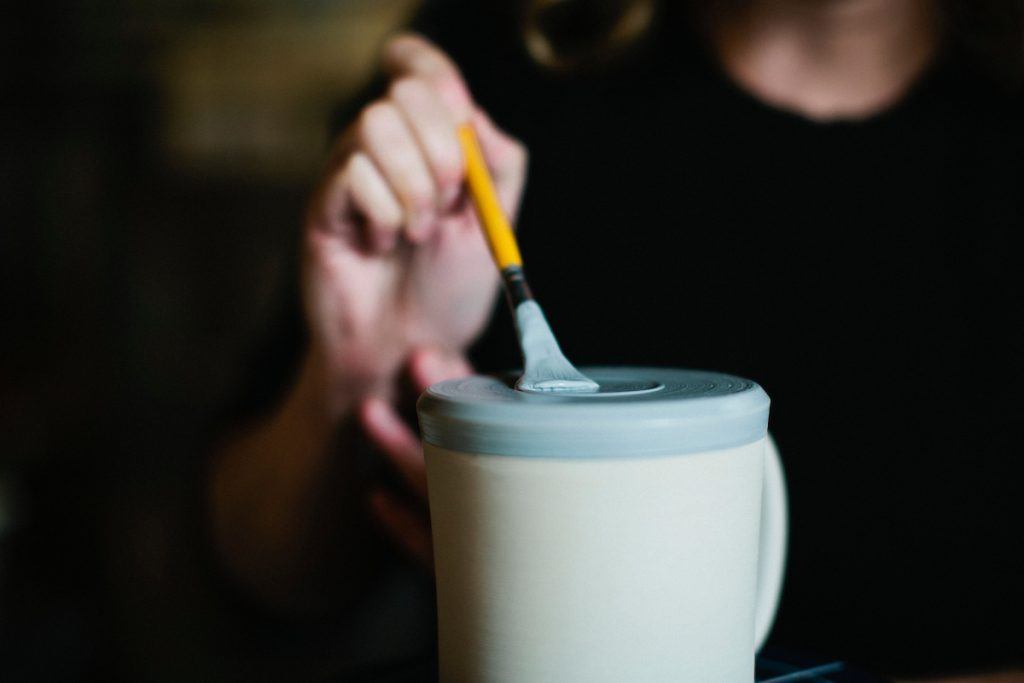 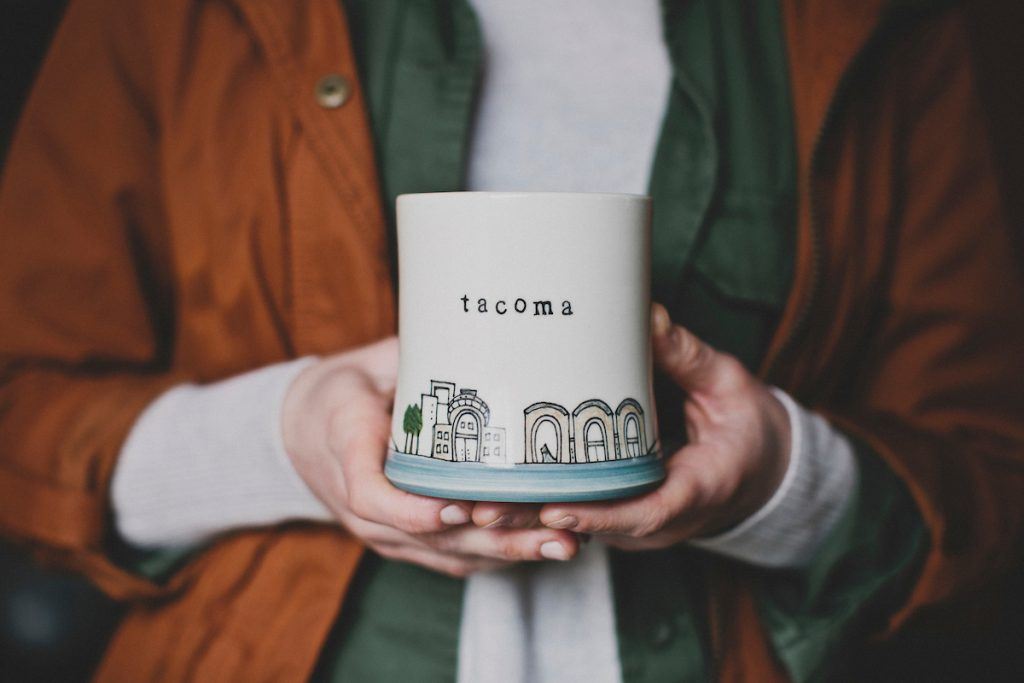 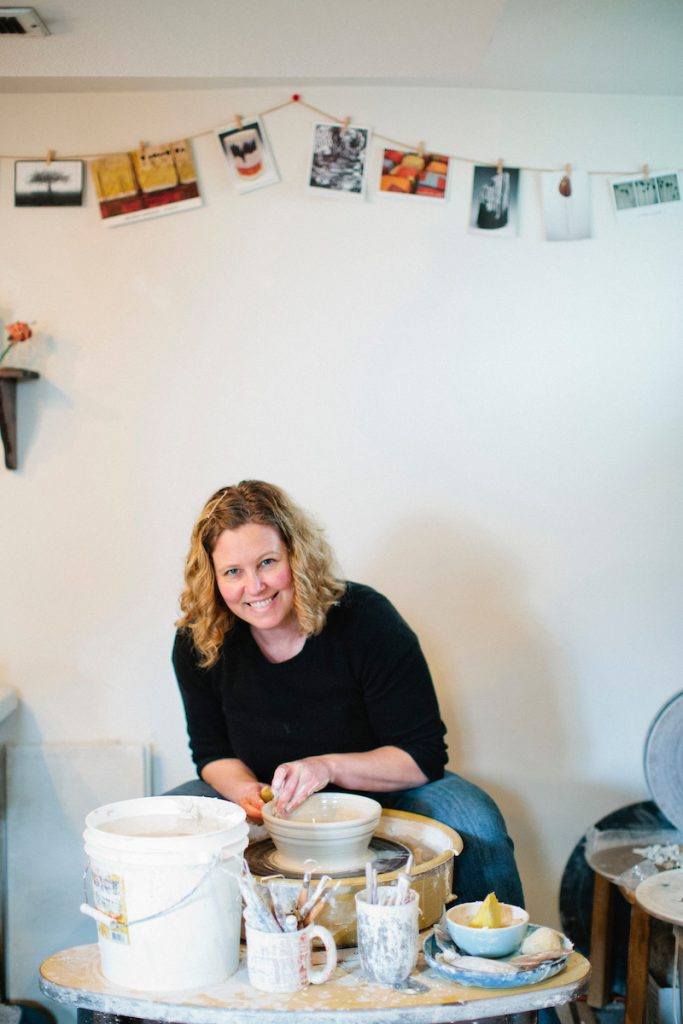 See Sarah and her work at these upcoming community events –