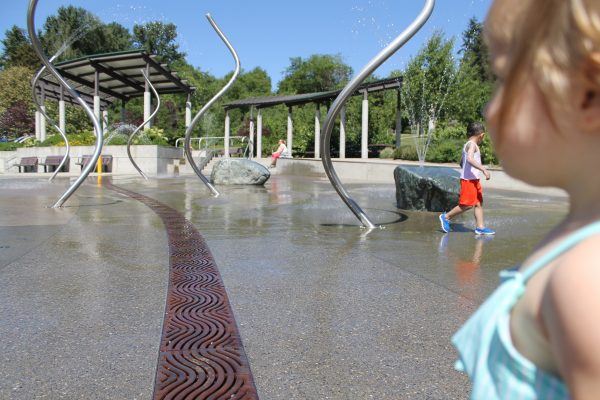 It’s “sprayground” season in the South Sound. When June rolls around, refreshing fun isn’t limited to the weekend (as it is during the month of May and September). Sweltering summers can make outdoor play harder than it should be. Sure that colossal jungle gym or back trail hike might be tempting but if it’s a blistering afternoon and the location isn’t a leap from water’s edge or shaded by infinite evergreens, it can be a less than enjoyable experience for patrons of any age. But who wants to stay cooped up beneath the AC unit when the gorgeous sun finally graces us. Get outside and soak up some vitamin D and a cool splash of fun.

Load the kiddos in to-go gear, equipped with some snacks, drinking water, play shoes and sunscreen and head to one of Tacoma’s popular splash pads. The waterworks run from 10 am to 8 pm daily through the summer.

Did you know that most Tacoma spray grounds are funded by Metro Parks and all are equipped with public restrooms and water fountains?! Thank you, City of Tacoma! 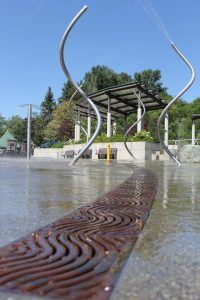 Titlow Beach Park in west Tacoma by the Narrows Bridge – 8425 6th Avenue, Tacoma
Once you slow to the bottom of 6th Avenue you will know exactly why this is a resident favorite. This public park encompasses Titlow Beach pebble and sand waterfront, Steamers seafood with outdoor deck seating, ice cream cones to go, paved boardwalk for bikes and blades, and most importantly the spectacular spray ground and joining playground that is both expansive and extraordinary. Fountainheads spiral upward into the sky and water buckets teeter until they tip. Smaller children can play on the outskirts with more mellow spouts while older kids get a real kick out of the drenching tower. Several picnic areas offer sanctuary from sunbeams and a clean station for resting and snacking. 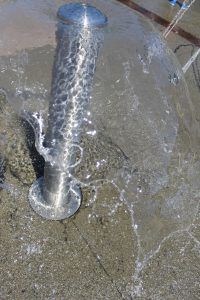 Avenue – 501 S I Street, Tacoma
A grassy sanctuary with a botanical conservatory and plenty of evergreen shade create a nice protective buffer between little ones and the dangers of the surrounding street traffic. Past the green and just across the road you can cool down and fuel up with coffee at Stadium Thriftway or lunch at the Hob Nob restaurant. Wright Park sprayground is constructed beside the larger wooden playground (implying less of a stovetop-to-touch when left in the sunshine). And who doesn’t love the sound of the wooden xylophone gently ringing summer out into the air as water sparkles round the mirrored orb in a circle of fountains.

SERA campus spraypark by the STAR center in South Tacoma – 3873 S 66th Street, Tacoma
This new addition to the south side is giving people another reason to explore all corners of our city. The park itself is vast and thoughtfully designed to incorporate grassy hills, athletic fields and a dry playground right outside of the popular community center. So when rain suddenly takes the day by storm, you can always appease the kiddos by running inside for indoor play.
**Parental advisory: the water can give off of a slight chlorinated odor similar to when playing at the pool, so just remind the kids to reserve their thirst for the drinking fountains. 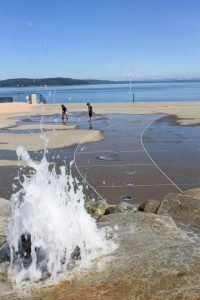 [GRAND PLAZA PICTURED LEFT] Grand Plaza sprayground at Point Ruston – 5005 Ruston Way
This seems to be the newest hot spot in town, conveniently located near Dolce Si coffee, the Point Ruston Cinema, Point Defiance to Ruston Way waterfront trail, Wheel Fun bicycle rentals and outdoor fish and chips. The kids will love the makeshift rock quarry with spouting fountains and jumping spurts of water emulating the Northwest Salmon run. All the while moms and dads relax in the amphitheater seating and soak in the views of Commencement Bay.
**Parental advisory: Be sure to bring good water shoes as wet rocks may be slippery.

Other spray parks in town: 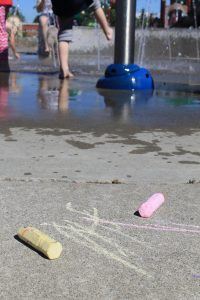 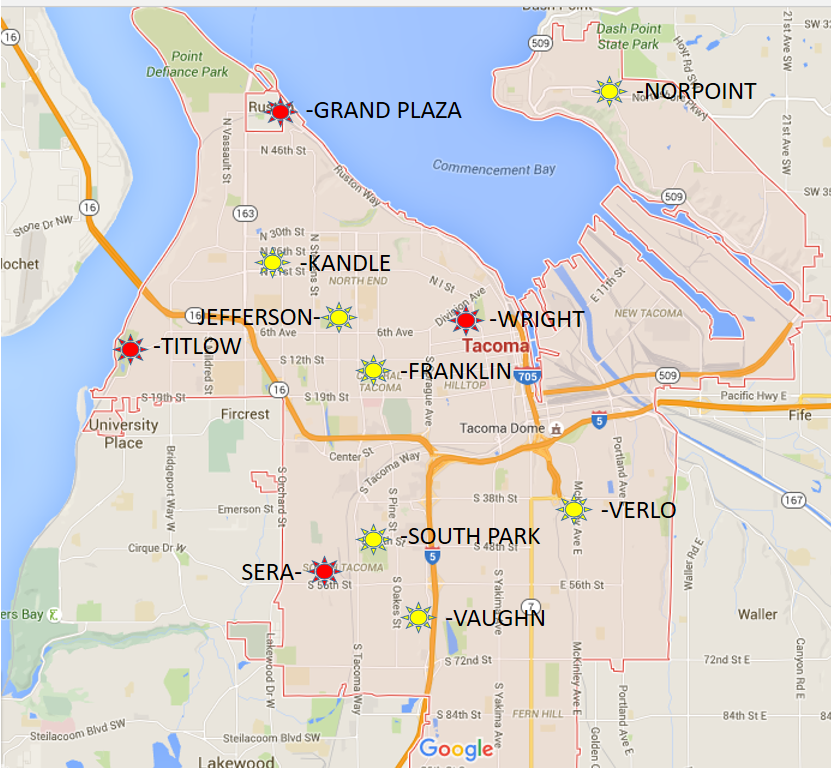