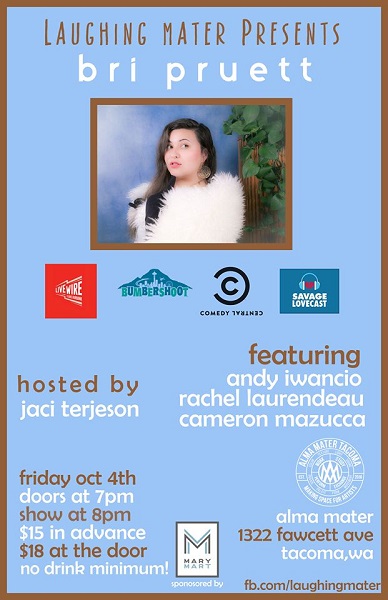 We’re back with our October installment of Laughing Mater!

Host:
Jaci Terjeson
Jaci is a Tacoma based comedian that travels around the PNW sharing far too much with complete strangers. She’s often seen giving unsolicited parenting advice and telling people they have something in their teeth. Jaci is a regular host in clubs and showcases around the Seattle area, and competed in the 2019 Comedy on Trial at Punchline Comedy.

Featuring:
Andy Iwancio
Andy is a transgender gal comedian from Seattle who is a regular at the Comedy Nest, Five Quarters Funny, and Comedy Crater. She has opened for Riley Silverman, James Adomian, and Cameron Esposito.

Rachel Laurendeau
Rachel was born and raised in Tacoma, Washington and got her start in comedy in Olympia while she attended The Evergreen State College. Now based out of Tacoma, Rachel works with children by day and entertains the bar crowds by night. Rachel produces a clean comedy showcase called Wholesome HaHas and co-produces various comedy events at Honey Studios in Tacoma. Rachel’s comedy is versatile and approachable with a generous sprinkling of sass. Rachel recently placed second in Seattle’s yearly Comedy on Trial competition and was selected to compete in the Western Oregon Comedy Competition.

Cameron Mazzuca
Lovable bearded everyman Cameron Mazzuca gets excited onstage. It’s because he’s happy to be doing what he loves, and probably also because he had too much Diet Coke. Born in the City of Destiny, Tacoma, and raised everywhere, he’s become a regular on comedy club stages in Seattle as well as festivals like Folklife, Bumbershoot and venues across the Pacific Northwest. His infectious enthusiasm and goshdarn good-Italian-boy friendliness will win you over in a big way.

Headlining:
Bri Pruett
Bri Pruett is a stand-up comic and improviser from Portland, Oregon, living in Los Angeles, California. Her TedxTalk on beauty standards dropped in 2018. In 2017, she was featured on Comedy Central’s Roast Battle. In 2016 she won the Willamette Week reader’s poll for Best Comedian in Portland. Splitsider.com has named her a “comic-to-watch.”

Her solo show, STELLAR, debuted in Portland in 2016; later it was accepted into the 2018 Bootleg Solo Queens Festival in Los Angeles. It’s been called, “Unaplogetically feminine…” and “Body-positive, pro-self love and pro-female sexuality… overtly feminist and feel-good.”

Bri has shared her time as a comedian and MC to several non-profit/arts organizations: Kollaboration, NARAL Pro-Choice Oregon, Planned Parenthood advocates of Oregon, JOIN, and The Portland Art Museum.

Tickets in advance $15
Tickets at the door $18
Doors at 7PM
Show at 8PM
18+
Sponsored by the best weed shop in town Mary Mart!