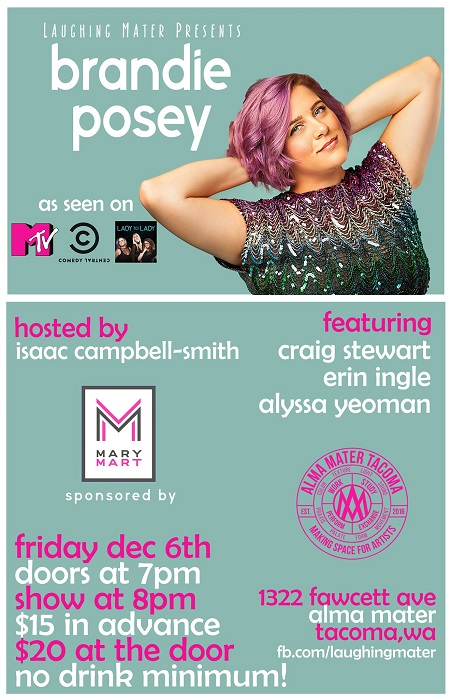 We’re back with our December installment of Laughing Mater!

Featuring:
Craig Stewart
Craig has performed in various festivals and competitions such as the 2018 Burbank Comedy Festival and the 2018 Golden Artist Entertainment US Comedy Competition. Once a proud cat owner, Craig ceased to have a cat once said cat died.

Erin Ingle
Erin has been performing stand-up since 2012 and currently features in clubs around the PNW. National touring is next on her list, following her performance at 2019s Laughing Skull Comedy Festival and on Comedy Central’s “Roast Battle II.”

Headlining:
Brandie Posey
Brandie is a stand up comedian, writer and producer who now calls LA’s comedy scene home. She has been featured as a performer at the Bentzen Ball, New York Comedy Festival, RIOT Comedy Festival, San Francisco Sketchfest, FEST in Gainesville, Bridgetown Comedy Festival, High Plains in Denver, among many others. She made her feature film debut in the indie dark comedy, “The Worst Year Of My Life” directed by Jonathan Smith and her first stand up record Opinion Cave debuted at #1 on iTunes & #12 on Billboard.com. Brandie’s comedic style has been described as a “Riot Grrl on acid”.

Tickets in advance $15
Tickets at the door $20
Doors at 7PM
Show at 8PM
18+
Sponsored by the best weed shop in town Mary Mart!